It’s Monday evening in downtown Shelbyville. A small crowd gathers in Bookmark, an eatery that is part of Three Sisters Books and Gifts on the town square. I had just finished a veggie panini, with its mouth-filling mixture of cheese and zucchini. I wonder whether, during late summer or fall, the zucchini would be fresh from the farmers market that forms annually outside their windows. I wonder whether the cheese would come from Shelby County cows.

It is early spring, and the newfound daylight, which sprang a couple of weeks earlier, pushes away the darkness that used to dominate at this hour. Sunlight streams through the window as the farmer speaks about his crops: corn, soybeans, and wheat. The corn goes to hog-growing facilities on the East Coast; the soybeans are processed into animal feed and cooking oil.

His wife of many years speaks about she married into farming. She felt isolated soon after they married. She was alone in a house while her husband spent long hours working the farm. And now technology has made farming more efficient, though that means bigger farms, not necessarily shorter work hours. When he started farming, he owned 400 acres. Today it is 1,000. The farmer speaks of yesteryear requiring backbone and muscle. Today’s farm life requires computers and brains.

The couple extol the virtues of growing up on farms. Their children observed the life cycles of animals and plants. “They had the opportunity to learn how to become their own boss, to learn how to be problem solvers.”

Another attendee tells how she grew up on a farm in Rushville, then “married a fella who was hauling milk.” He picked up milk from farmers and took the Grade A milk to Indianapolis. The “B milk” (for butter) would go elsewhere. She would accompany him just to keep him company. Then tankers transported milk, and the travel time was drastically reduced.

All agree that suburban sprawl is a threat to their lifestyle: “If you have love of the land, you don’t want development.” Another mentions that working the land gives him a “closer touch with nature and God’s creation.”

By now, images, smells, and sounds of farming fill the air: coyotes at night, owls in flight, tomatoes, fried chicken, corn on the cob, a favored cherry tree.

Meanwhile, the unassuming poet takes note at a table and listens for cues that would spark his imagination. Based on this evening of conversation, he will create words that will grace the side of a Shelby County barn. And somewhere in Shelby County, a visual artist lurks, still unidentified, but not for long. This person, whoever he or she is, will add images to complement the words of the poet.

This project, when completed, might inspire passers-by to think about the bacon they took for granted on their breakfast plates, or the fried tenderloin they will order at the nearby Cow Palace on State Road 9. Or the milk served at the counter of Bookmark
Posted by Word Hunger at 11:49 AM 0 comments 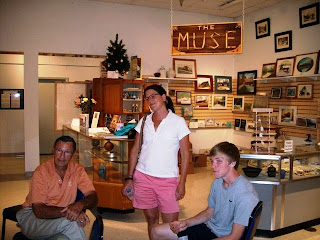 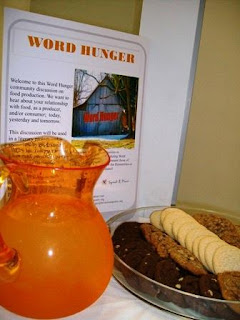 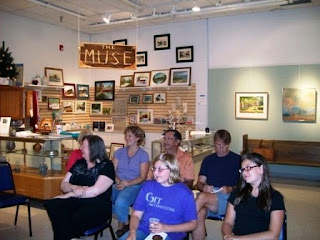 A Visit to Putnam County Museum - by Alexa Newlin

I went to our local museum with Reilly and her grandma.  I found out that a papaw is an exotic type of fruit.  They can be found right here in our very own Depauw Nature Park.  I had never heard of these before.  Apparently they look like a kiwi without the fuzzy part, and smell like a banana.  I wish we had asked what it tastes like! The next time I go to the nature park I am definitely going to look for one!

(This blog post was written by Alexa Newlin who attended the discussion with her friend, Reilly Anderson. Reilly is the granddaughter of Brick Street Poetry board member, Susan Miller.)
Posted by Word Hunger at 8:56 AM 0 comments

Putnam County farmers had interesting stories to tell about their experiences producing food over the years. The recent discussion on August 5th was appropriately held at the Putnam County Museum, which depicts life and culture in the county since it was founded, including agriculture from its early days to the present.


The discussion, titled Word Hunger, and the public art and poetry project that will result from it, are sponsored by Brick Street Poetry Inc., through the support of the Indiana Humanities Council’s Food for Thought project, and the National Endowment of the Humanities. Word Hunger is also part of the Spirit and Place Festival. A presentation on the entire Word Hunger project will take place on Nov. 14 at the Indiana State Fairgrounds barn.
Posted by Word Hunger at 8:51 AM 0 comments

These community discussions will be an integral part of an upcoming literary art project.

link to Sprit and Place blog 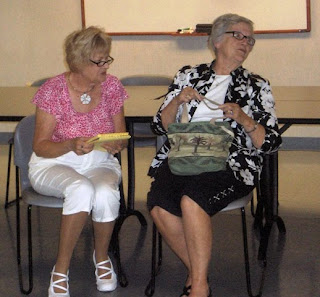 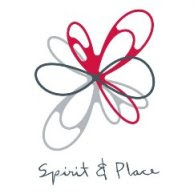 Word Hunger
Zionsville, IN, United States
Word Hunger, sponsored by Brick Street Poetry Inc., will engage community discussion on food production in several Indiana counties including: Boone (Aug 24, 2010), Hamilton, Marion (Aug 11, 2010), Putnam (Aug 5, 2010). These community discussions will be an integral part of a literary art project. Any views, findings, conclusions or recommendations expressed on this website do not necessarily represent those of the National Endowment For the Humanities or the Indiana Humanities Council.